The New Zealand team of chefs has scooped two bronze medals in the Culinary Arts section at the 2016 Culinary Olympics in Erfurt, Germany – with the Hot Kitchen section still to be competed in.

The team’s table centrepiece was a food model of the Lord of the Rings character, Gollum.

“The judges totally got the New Zealand theme and where we were coming from. We were marked down because the heat in the room started to melt Gollum, a little, but we were judged on the skill that went into it,” Keith says.

It’s a different medal system to the first, second, and third placing of the sporting Olympics. In the Culinary Olympics, all teams start with 100 points and then points are deducted by the judges for various things they perceive as being wrong with the dish. There could be as little as half a point separating gold from silver and silver from a bronze medal.

Fonterra’s Director of Global Foodservice Grant Watson says the team has done an amazing job in the Culinary Art section.

“The standard of competition was extremely high and for New Zealand to pick up two bronzes in their first attempt in 28 years is a fantastic result and speaks to their skill and the quality of the food they produced,” Grant says.

The bronzes were gained in the pastry, and the savoury sections of the Culinary Art section. In this event, a variety of fine-dining restaurant dishes that are usually served hot to a guest are presented and displayed cold to the judges. Chefs must use gelatine and aspic to give food the appearance of being fresh and hot.

On Wednesday morning NZ time, the NZ Anchor Food Professionals team will compete in their final category – the Hot Kitchen section; a section they describe as their strength.

In this event, dishes are served a’la carte at the Restaurant of the Nations, where members of the public dine alongside members of the Culinary Olympics judging panel. The competing teams do not know which of the 110 diners the judges are.

The team is hoping for gold with their salmon entrée, lamb loin main course, and South Pacific-inspired dessert. 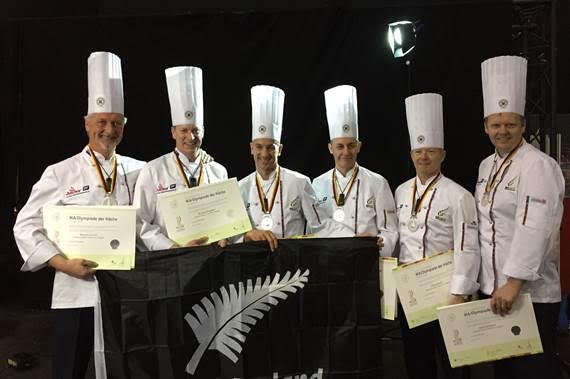